# Universal Champion “The Fiend” Bray Wyatt vs. Daniel Bryan
– Second chances are hard to come by, but Daniel Bryan just earned his.
Bryan fell to “The Fiend” Bray Wyatt at Survivor Series in November, and he was subsequently dragged to hell and had his hair ripped out by the Universal Champion several nights later. This horrific scene left many to wonder if Wyatt had broken Bryan permanently.
Instead, quite the opposite happened: It gave Bryan new life.
Coming back with a new look and a new yet familiar attitude, Bryan reconnected with the WWE Universe, reignited the “Yes!” Movement and defeated The Miz and King Corbin in a Triple Threat Match on the December 27 edition of Friday Night SmackDown to earn the right to yet again challenge “The Fiend” Bray Wyatt for the Universal Title at Royal Rumble 2020.
After “The Fiend” Bray Wyatt attempted to attack Kane on the Jan. 17 edition of SmackDown, Bryan asked for the Universal Title to be on the line in a Strap Match at Royal Rumble, where a leather strap will be tied to the wrist of each competitor.
Who will survive when the competitors are bound by the wrists for what is sure to be a harrowing showdown? Find out when Royal Rumble 2020 streams live on the award-winning WWE Network on Sunday, Jan. 26!

The high-stakes free-for-all will start with two competitors, and Superstars enter the ring at equal intervals. This continues until all 30 Superstars have entered the bout. Elimination occurs when a Superstar is thrown over the top rope, and both feet hit the floor. The last Superstar in the ring will be declared the victor.
Don’t miss the wildly unpredictable Women’s Royal Rumble Match, Sunday, Jan. 26, at 7 ET/4 PT, streaming live on the award-winning WWE Network!

# Raw Women’s Champion Becky Lynch vs. Asuka
– How bad does Becky Lynch want a match with Asuka? She not only staked the Raw Women’s Championship on it, but in many ways, her reputation and her future as well.
As Lynch revealed on Raw, she was so hellbent on getting a one-on-one match with The Empress of Tomorrow — the last remaining Superstar to hold an unanswered win over Lynch since her 2018 reinvention — that she refused to even negotiate her upcoming contract unless the bout was sanctioned. The hardball tactic got The Man her match at the Royal Rumble pay-per-view, but here’s where the uncertainty begins.
More than anyone else Lynch has faced, Asuka seems to hold a space in the Irishwoman’s typically impenetrable head. Becky never seems quite as flustered as when she’s in the ring with the Japanese striker, as evidenced by the fact that Asuka simply keeps winning. Most recently, Asuka and her tag team partner Kairi Sane retained the WWE Women’s Tag Team Titles against Lynch & Charlotte Flair in a brutal TLC Match, but there have been other instances of one-upsmanship as well on the part of Asuka over these last couple of months.
It got to the point that Asuka was confident enough to utter the phrase “Asuka Two Belts” in English when The Man made it clear she wanted some, a clear indicator that at least one of these Superstars is confident in the outcome, and it’s not the one it usually is. So, as Becky prepares to wager her coin, her pride, and the last remaining piece of the history she made at WrestleMania 35, she walks into Royal Rumble, for the first time in a long time, with everything to lose. Usually, that’s just the way she likes it. But as has been made clear, there’s nothing usual about this.
Tune in to the Royal Rumble pay-per-view, Sunday, Jan. 26, at 7 ET/4 PT, streaming live on the award-winning WWE Network.

# Roman Reigns vs. King Corbin (Falls Count Anywhere Match)
– Before Roman Reigns and King Corbin enter the Royal Rumble Match for an opportunity to earn a World Championship Match at WrestleMania, the two fierce rivals will once again battle in a Falls Count Anywhere Match.
Week in and week out, the conflict between The Big Dog and WWE’s resident monarch has grown more and more brutal, from Corbin humiliating Reigns by handcuffing him to the ring post and covering him with dog food to Reigns costing Corbin an opportunity at the Universal Championship to a frenetic Tables, Ladders & Chairs Match to all the chaotic brawls in between.
After The Usos returned to help neutralize Corbin and Dolph Ziggler’s two-on-one assault on their cousin, Corbin accused his foe of “hiding” in the Royal Rumble Match just because he’s scared of another conflict with him. In response, the former World Champion proposed that before entering the high-stakes matchup, they battle in a one-on-one showdown so that he could beat his adversary twice in one night.
Then, after overcoming the recently returning Robert Roode on the Jan. 17 edition of SmackDown, Reigns earned the right to pick the stipulation in his match against Corbin. As a result, The Big Dog will face King Corbin in a Falls Count Anywhere Match!
Don’t miss the Royal Rumble pay-per-view, Sunday, Jan. 26, at 7 ET/4 PT, streaming live on the award-winning WWE Network.

A tradition dating back to 1988, the high-stakes free-for-all starts with two participants, and Superstars enter the ring at equal intervals. This continues until all 30 Superstars have entered the bout. Elimination occurs when a Superstar is thrown over the top rope, and both of his feet hit the floor. The last Superstar in the ring will be declared the victor.
Don’t miss the wildly unpredictable Men’s Royal Rumble Match, Sunday, Jan. 26, at 7 ET/4 PT, streaming live on the award-winning WWE Network!

# SmackDown Women’s Champion Bayley vs. Lacey Evans
– There are some lines you just don’t cross.
And not only have SmackDown Women’s Champion Bayley and Sasha Banks repeatedly crossed the line in recent weeks during some heated dust-ups with Lacey Evans, they’ve taken great delight in doing so, constantly mocking Lacey’s family and bashing The Lady of WWE for her alleged lack of parenting skills.
The Boss escalated the animosity to dangerous levels by taunting The Lady’s young daughter, who was sitting in the first row during Sasha’s recent singles match against Lacey at SmackDown. The incident sent Evans into a rage, as she took down Banks at ringside and unleashed a barrage of haymakers until the match ended in a double count-out.
But Bayley and Banks didn’t stop there. The mean-spirited tandem kicked off a recent SmackDown with yet another attack against Evans and her family, all while Bayley claimed that she and Banks were the unquestioned leaders of the SmackDown locker room.
Evans was scheduled to battle Banks on the Jan. 17 edition of SmackDown, but before the match, she got into a wild brawl with The Boss and Bayley in the backstage area! Sasha, who was seen moments later sporting an ice bag on her ankle, decided that Lacey didn’t deserve a match against The Boss. Instead, Bayley was forced to take Sasha’s place in a non-title match against The Lady, and Evans scored arguably the biggest win of her WWE career by defeating Bayley with vicious Woman’s Right.
Evans, who tangled with Becky Lynch in a heated series of matches in 2019 and came within an eyelash of dethroning The Man for the Raw Women’s Title, now gets her first championship bout as member of the blue brand in what is sure to be a pull-no-punches affair.
And Bayley, whose newfound edge led her to a SmackDown Title win against Charlotte Flair, won’t hesitate to use nefarious tactics or lean on Banks to keep the championship in her possession.
Will The Lady of WWE get retribution after weeks of ridicule and personal attacks, or will Bayley have another trick up her sleeve for the former United States Marine? Find out at Royal Rumble on Sunday, Jan. 26, streaming live on the award-winning WWE Network!

# Shorty G vs. Sheamus
– At Royal Rumble, Shorty G will test his incredible grappling abilities when he goes head-to-head with a returning Sheamus, who immediately targeted his opponent as a representation of everything wrong with SmackDown.
After weeks of talking about SmackDown’s decline during his absence, Sheamus finally stepped out of the shadows and launched an unprovoked attack on Shorty G. Since then, he has stated that the up-and-coming Superstar represents all the problems that have infested Friday Night SmackDown since he left.
A backstage conflict ensued and a confident Shorty G left The Celtic Warrior scrambling and embarassed after an opportune attack. As a result, the two Superstars will battle it out at the Jan. 26 pay-per-view.
Don’t miss Royal Rumble 2020, Sunday, Jan. 26, at 7 ET/4 PT, streaming live on the award-winning WWE Network!

# United States Champion Andrade vs. Humberto Carrillo
– Andrade took a month of Humberto Carrillo’s career. Now, Carrillo is out to repay the favor by taking the United States Championship.
The young, up-and-coming Superstar will challenge Andrade for the star-spangled title at the Royal Rumble event, potentially bringing to a head a months-long quest by Carrillo to capture the storied championship. Not only did Humberto unsuccessfully bid for the title when AJ Styles was the champion, it was an attack from Andrade during a Gauntlet Match to name the next contender for the title that put Carrillo out of commission after he was Hammerlock DDT’d onto the exposed concrete of the arena floor.
Carrillo has had his eye on this prize for some time, and Andrade has never hesitated to mock his rival while he quickly blazed a trail of his own to capture the title from Rey Mysterio. Carrillo seems to have heard the champ’s words, making a dramatic return to save Mysterio from a post-Ladder Match beatdown by Andrade. With Carrillo back in action and Andrade holding the championship he’s coveted for so long, he has the opportunity to get his title and get his man all in one fell swoop. Of course, to do that, he’ll have to crack a code no Superstar has yet to manage. But as we’ve often seen with Humberto Carrillo, the sky is the limit. Literally and figuratively.
Tune in to the Royal Rumble pay-per-view, Sunday, Jan. 26, at 7 ET/4 PT, streaming live on the award-winning WWE Network. 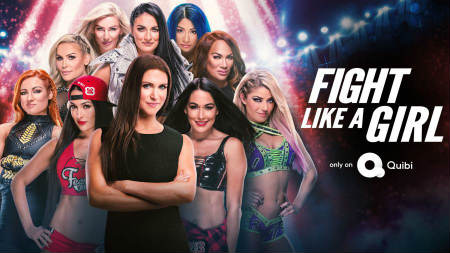